Copper has been neemed. She will complete her course of antibiotics on Sunday and will be released. Her appetite is still not good but at least she eats some dry food. No more tapeworm segments in her stool.

The yellow shade of Tommy’s ears if fading. Strangely he seems to poo and pee only every two to three days… but poo and pee look normal. He also spends a lot of time digging in the litter box and meowing before he finally delivers. I let him out of the cage at night when only the more peaceful cats are in my room.

Stitches has been sneezing for some time now… have been giving him lysine.

Sparky had a snotty nose some time back but he still ate well so no need for antibiotics.

An orange kitten about 3 month old was spotted by a resident of *28 yesterday night. We tried to lure him out from under the car and actually I almost had him as he came close to my hand. Then tried using the trap but unsuccessful. The kind Malay Lady is willing to house the kitten and her aunt even offered to adopt him. She said she would try again later…

Sparky to be sterilized 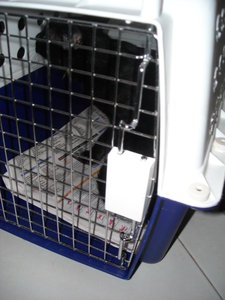 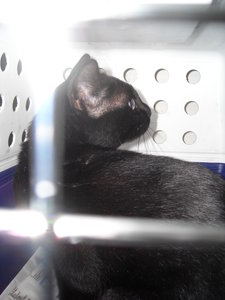 Sparky in the nice new carrier

Saw him again at *23 but minus the collar. He is less shy now.

He is shy so couldn’t get a better shot. It’s an unsterilized male, all black, wearing a a shiny collar.