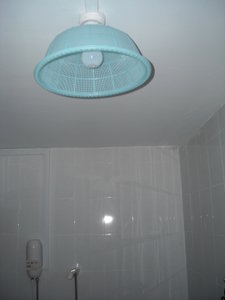 Not your usual lampshade 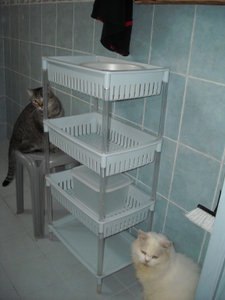 Dawn is getting better 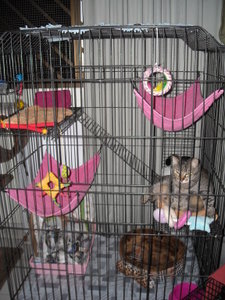 Lethargic and no appetite for almost 2 weeks… fever, vomiting and lost weight. Now finally starting to eat on her own again. 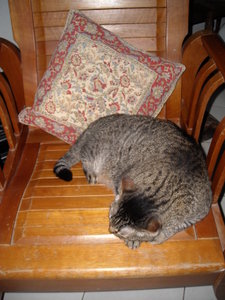 Curved seat and back… lower back support!

Dawn fell off the fridge yesterday. My fault, because I disturbed her by opened the freezer door. She got up and placed her back paw where the door was supposed to be… lost her balance and started sliding down back first and desperately trying to cling to the top of the fridge with her front paws. Her claws are long and sharp.. not trimmed!

Out of curiosity I checked the fridge… not a single scratch in the smooth and shiny surface! So don’t tell me cats can scratch cars!

By the way, Dawn is fine. I managed to slow her slide a little by pressing my body against her… could probably have grabbed her by the front paws but that might have injured her as she is a heavyweight!

Dawn in the basket 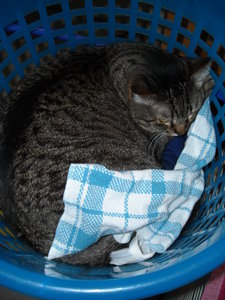 Tossed my face towel into the laundry basket without checking…tsk tsk!

Whatever you do, remove the cat first!

Dawn had vomited a few times after eating and also had been eating less. Yesterday she refused food and vomited clear liquid after drinking water.

Slept with her next to me… actually hardly got any sleep. She was not her usual self but then towards morning she seemed back to normal… purring and going under the blanket.

She ate some soft food this morning and so far kept it in. Poor Dawn has to stay in the small rabbit cage as the big ones are taken by Storm and Muddy. I need to observe that she can pee and poo…in case there is a blockage!

Ashley is the wannabe Top Cat! He likes to be able to look down on the lesser beings đź™‚ But actually it was Dawn who showed him how to get on the wardrobe by jumping up from the cage which is on the floor about one meter away from the wardrobe. Dawn was the best climber and jumper as a kitten… now she is the second fattest but still the best!

Dawn can even jump from the other wardrobe onto the curtain rail… then walks 3 meter to the end and returns to top of the wardrobe by walking backwards. The curtain rail is the aluminium type – about 1cm width! I will stand there ready to catch her if curtains, rail and everything comes crashing down! Phew! … I am really glad she hasn’t done that for a while! Dawn used to be the heaviest of all the cats but has now been overtaken by Billy Boy and Snoopy.

Today Damy went onto the curtain rail… walked to the end then almost dropped but managed to jump onto the desk.

Dawn slowly inching closer to Nushi’s special mix of kibbles while pretending not to be interested… but Nushi is not fooled!

Fussy Nushi will get whatever she will eat… and it has to be served on the mat, even the wet food!

Earlier was watching Bunny jump up onto the sewing machine not realizing that Orange Boy was sitting there. Both shocked and don’t know what to do! So both looking the other way and then OB yawning and very slowly stretching his legs and moving away a little. Normally Bunny will whack whoever comes too close… me included.

Seems Nushi and Tommy are prone to constipation. Had given laxative to both of them yesterday. Tommy was meowing and wildly digging in his litter trays… managed to topple one… but finally a big poo was delivered! Nushi walked all over the room trying to poo. I was really worried… she even vomited a little. Then finally she managed to get it out.. but it had to be on my bed… sigh! Never a dull day with cats!

Billy Boy is back 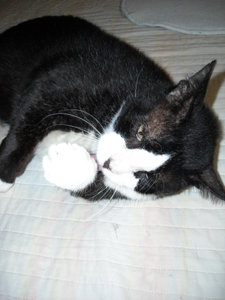 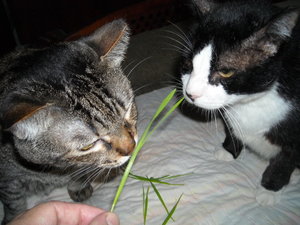 The adopter was sad to return BB but she realized that he was lonely being left on his own for long hours and while she is away travelling which happens very frequently. 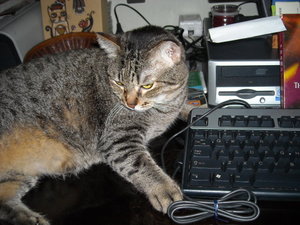 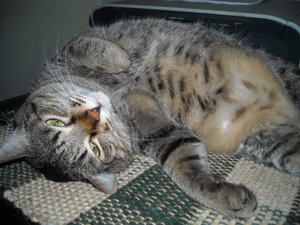 Rocky got whacked by Dawn when he jumped on the cupboard where she was resting and Nushi gave him one of her slow-motion hisses when he jumped on the bed. Ash also chased Rocky again and was confined to the cage for a short while…Then I heard growling on the balcony… Stitches and Billy Boy again!

Went to TC yesterday to talk to the Property Manager especially about posters… my request was to give a grace-period of 5 to 7 days for lost-pet posters. I pointed out that any lost home cat if not found will only add to the stray population… and multiply if not sterilised! So it is in everyone interest that lost pets are reunited with their guardians. The same goes for community cats. I suspect that Rocky was removed by a resident probably because families on the 4th, 8th and even 12 level used to bring him up. The large vacuum left by Rocky was quickly filled by several other cats from neighbouring blocks (all sterilised community cats).

Now I will have to flyer the whole block before more community cats are lured upstairs and removed….

A TC officer from another area mentioned that there is someone feeding cats and birds leaving a mess of rice on newspaper at block *30 (Area 3). I explained that this person does not belong to “our group of responsible feeders” and I am glad that he intents to get her fined for littering… This lady had been approached by the feeders who had to clear up the mess but she still continues. Hopefully a fine or a warning from TC officers will do the trick.

Dawn on top of the fridge

Orange Boy in his new bed 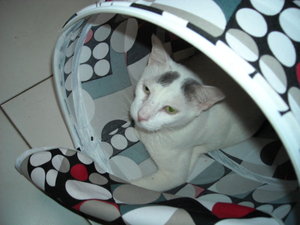 Ash is better but still syringing him water with cranberry extract. The extract is not very sour tasting (unlike vinegar or vitamin c) and can even be mixed into the food.

Home cats reclaiming the balcony after Pema & Silverine went to the cattery.

Hope the hammock will hold…

The swelling is all gone now

Nush has inflamed gums again…and Ashley has the urinary infection again. Hope Nush will get better with some antibiotics and I have been syringing Ashley with water and cranberry juice.

Mirko went for shaving yesterday…and Nushi will be done next week if she is better by then.

Dawn in the basket

Dawn in her favourite place… the kitchen sink!

Photos of the rest of the family

Photo 1: Sky is less shy now and has a better appetite

Photo 2: And here is our heavyweight champion! Look at that belly

Ginger has a nice big cage, many thanks to Cathy! I fixed a hammock for him this morning, to make him more comfortable, since he will be staying for about 2 weeks.

Dawn had me worried, but she is ok now. She ate a little and walked around but is still resting most of the time.

Gave Sky the NSAID today (was supposed to start yesterday) and was relieved that she had no bad reaction to the medication. I was worried after what happened to Nushi. Skyâ€™s eye does look fine today and hopefully she is getting better. Our Little Sky loves to rest high up in the â€śtreeâ€?, on those thin branches. Has been up there all day, I guess she misses playing with Dawn.

I brought both Dawn and Sky to the vet this morning. Sky had a slight fever and was given an injection and a course of antibiotics. Sky is much smaller than her sisters and a little timid. She also has poor appetite and a weepy eye. Eye drops and ointment didnâ€™t help. The vet thinks it could be an allergy.

Dawn was sterilized and I only found out later that she was on heat. She is recovering very slowly, has not taken any food, so I gave her some Nutri-plus. She looks more alert now but is still unsteady.

Met a feeder from another estate at the vet and it turned out she is from my estate and two of my cats at Blk *21 area 1were actually sterilized by her some years back.

I found these 3 kittens and one cat, who could be their mother, 2 days ago abandoned by their owner.. I am trying to get them adopted as they have been indoor cats and would not survive if left outside..The 3 kittens are all pretty girls by the names of Dawn, Sky and Pebbles and the young adult cat is called Crystal. Crystal is a beautiful light-grey cat who is very affectionate. The 3 kittens are playful grey tabbies..All the cats have long and beautiful tails and are healthy..