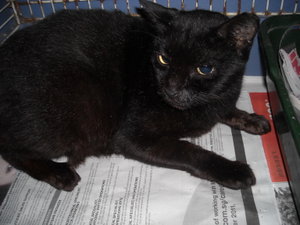 Unwell, frightened and someone cut her whiskers…

Olive was pregnant with 5 fetuses! I am glad that I took her yesterday, after failing to trap Pearl and Sandy. The actual plan was to wait another month as she just gave birth 2 months ago. The vet also extracted a tooth and removed tartar and dressed a wounded paw, all free of charge. Lucky Olive! I didn’t even know she had these problems, as she wouldn’t let me come too near…

No, this is not about a new vegetarian recipe 😉 Young Ginger is Little Grey’s new friend at *14 area 2. He is very shy and jumpy but was hungry enough to walk into the carrier. This new Ginger was sterilized this morning and I released him at night, as he was still very frightened and wouldn’t eat. Then I tried to trap Pearl, the young mother cat at *18 area 2, but was unsuccessful. I had trapped her a few month back, before she had her kittens, but was careless and let her escape while trying to transfer her to the carrier. So will not be easy to trap her a second time. Sandy at *26 area 1 was not hungry or curious enough to venture into the trap…then finally managed to get Olive, after a long wait.